KNIPF is a technical documentation and technical graphics company with 20 employees, based in Gerlingen (near Stuttgart), Germany. KNIPF partners with companies such as Bosch and Bosch Rexroth (the Bosch Group is a leading global supplier of industrial, automotive and consumer technology in more than 50 countries). At KNIPF, employees create professional-quality technical graphics and illustrations to support technical documentation, including operation and maintenance manuals. Employees create perspective drawings (predominantly 2D or 3D CAD data) or production drawings based on a variety of templates. Photos are often needed to illustrate problems such as mechanical deterioration or discoloration. For this reason, KNIPF needs software that lets it expertly edit images.

Until recently, KNIPF worked with the Unix-based solutions of InterCAP. Notably, software products such as Mondello/NT and ActiveCGM Author were regularly used to create exploded drawings with item numbers and hotspots for a Bosch electronic parts catalog (as illustrated on the left), and to produce line drawings based on photo templates.

Ready for a change

In 2006 when KNIPF changed to a Windows-oriented system, they sought a technical illustration solution with a functionality that would, at minimum, equal their previous software. From a wide range of vector graphic programs, they created a shortlist of software ®that included Corel DESIGNER Technical Suite [now CorelDRAW Technical Suite], as well as Arbortext IsoDraw (formerly Itedo IsoDraw) and Adobe Illustrator. After careful evaluation, it was determined that only the Corel DESIGNER products, with the help of a conversion tool offered by Corel, were capable of opening and directly processing illustrations created with Mondello. The choice for the most seamless software transition became clear. 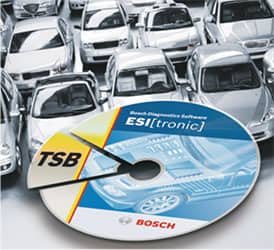 By switching to Corel software, KNIPF was able to make substantial savings in licensing costs, by gaining software that provided features almost identical to Mondello for just a tenth of the price, and without the maintenance licenses required by Mondello and ActiveCGM Author. The possibility to easily create hotspots (drawing elements that link to other sections) and save them to the desired CGM output formats also supported this decision. The KNIPF team also benefited from the new interface and streamlined operations offered by CorelDRAW Technical Suite, as explained Marco Hauk, Executive Director of KNIPF. "Working with a consistent user interface throughout the different integrated software components is easier for our employees and allows them to work more efficiently," Mr. Hauk said. "This pays off in the form of a faster completion of the projects and lower training costs. It guarantees a faster return on investment."

Therefore, all initial concerns about switching to new software were quickly dispelled. Particularly as Corel DESIGNER - with an Add-on - brought additional value by providing 3D import of engineering data. With this, conversions and laborious consultations between multiple departments became a thing of the past.

The steps to seamless software migration For KNIPF, the software transition was very smooth. Drawings in Mondello's *.dwg format were opened in Corel DESIGNER and from then on saved in its native *.des format. During this process, layers were automatically segmented and named, objects were aligned, and line and text properties were modified. After a short instruction period, employees quickly adjusted to the new workflow of Corel DESIGNER.

To facilitate this, two technical illustrators from KNIPF received external training in a two-day course, where they learned everything they needed to know to use the programs effectively.

To a future with Corel DESIGNER

Today, all technical illustrators at KNIPF are familiar with Corel DESIGNER. Every quarter, the employees at KNIPF create approximately 1,200 technical illustrations (mostly 6299exploded drawings) for Automotive Aftermarket, a business division of Bosch. Using a VBA macro solution that was created for KNIPF and integrated into Corel DESIGNER, KNIPF employees batch-generate hotspots and output illustrations to the CGM format at the end of each quarter. These interactive CGM files are then delivered to clients such as Bosch. Bosch imports the results into ESItronic, the Bosch software for automotive workshops.

Marco Hauk and his team are satisfied with the migration to a Windows environment with Corel as its core. "Actually, the transition was easier than we had expected. Corel DESIGNER is, together with the other applications included in Corel DESIGNER Technical Suite [now CorelDRAW Technical Suite], a very versatile tool," Mr. Hauk said.

KNIPF intends to deploy Corel DESIGNER in all of its departments that create (technical) illustrations.