Nearly 14 years ago, Rick DeRennaux noticed a clear disconnect between what students were learning about technology and how technology was actually being used in the workplace. Thinking there was a better way, he set about developing highly engaging curriculum that would motivate and empower students.

To achieve his goal for the curriculum, he turned to CorelDRAW Graphics Suite, which he’d been using for various creative endeavors since version 4. “I started using CorelDRAW in college, so it was a natural choice,” DeRennaux explains. “Back then, I used it to design T-shirts for screen printing, which provided supplementary income while I was in school.”

Today, Tech Now provides curriculum for approximately 290 students with disabilities who are spread across 21 high schools throughout rural, urban, and suburban Oklahoma. “We want to help these kids learn about how the workplace uses technology, so they can build employable skills or prepare for post-secondary education,” says DeRennaux.

From the start, the goal of Tech-Now has been to provide students with disabilities the opportunity to develop marketable skills and to explore potential educational and employment opportunities.

The Tech-Now curriculum is developed with CorelDRAW Graphics Suite and deployed through video-based computer-aided instruction, which gives teachers the necessary training to teach the students.

The students in the Tech-Now program work together in teams, creating real-life products to sell, such as buttons, bracelets, and color-highlighted black and white photos.

“The students learn things like how to form a company and design a logo,” explains DeRennaux. “Since they’re developing a real product, they’re practicing being an actual employee.” 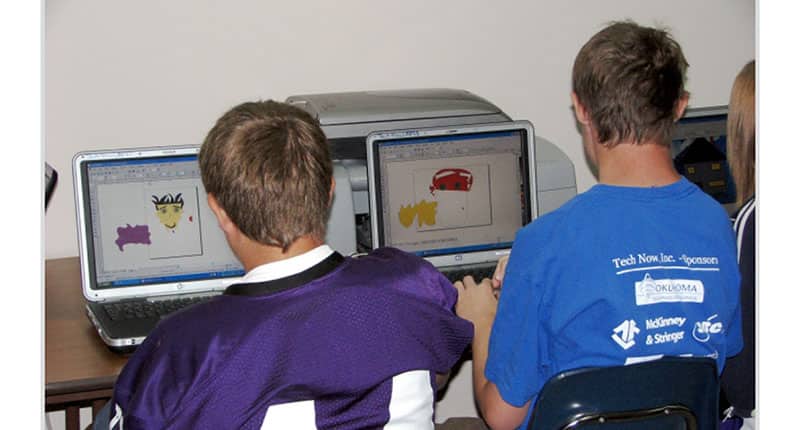 For many of the students enrolled in the Tech-Now program, it’s often the first time they’ve been able to attend a technology class. “Some of these kids have physical disabilities, visual impairment, or intellectual disabilities,” says DeRennaux. “And it’s very rewarding to watch them gain confidence and self-esteem as they learn what can be accomplished with technology.”

Every day, students in the Tech-Now program use CorelDRAW Graphics Suite to work with their curriculum. “Take creating a ™logo,” says DeRennaux. “We’ll use Corel PHOTO-PAINT to teach them about masking but it’s more than just knocking out the logo for their high school mascot.”

“They’re learning fundamental skills that they can apply after they’ve formed companies and start designing their own custom gravity racers,” he continues. “They’ll learn how to use shapes or lines, colors and text.”

Not only are the products developed and produced by Tech-Now students available to their peers for a small donation to the Tech-Now class, but there’s a State Competition each year for student teams and their completed projects to compete for prizes and awards.

DeRennaux believes the success of the Tech-Now program speaks for itself. “Many of our teachers tell me that these students are actually excited to get into class, and that it has become the best part of their day,” he explains.

“And you have to remember that many of these kids don’t get the attention they deserve in traditional classes, so we’re reaching students who haven’t had the opportunity to express themselves through design and teamwork.”

Since the Tech-Now approach engages all the senses, DeRennaux believes its impact will endure. “They can see it, hear it, and touch it,” he says. “So that equates to better learning and lasting memory.”

“We did a survey after our first 10 years,” says DeRennaux. “We tried to locate every former student who’d spent at least one year in the Tech-Now program. And we found that the high-school graduation rate was 96.6 percent compared to 57 percent for students with disabilities at the national level.”