Using the Perspective tool, perspective deformation and guidelines to create a sports car in one-point-perspective

This tutorial will demonstrate how a rough sketch of a car can be drawn in perspective with CorelDRAW. A basic knowledge of Guidelines, the Toolbox and experience with drawing lines and curves is required.

The three views in the image below are aligned in such a way that the size and proportion of the car are consistent throughout all views. Whichever reference you use, pay the most attention to the wheels of the car, since they should be consistent, simple forms. 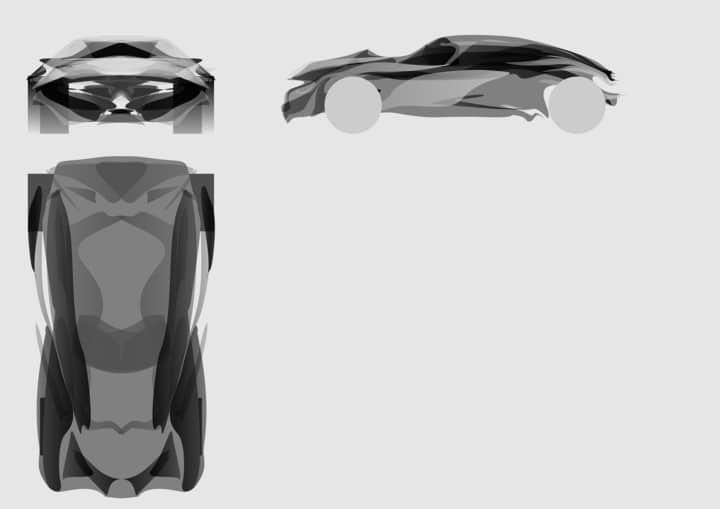 In this Perspective I have decided to draw the car as seen from the left side, with a part of the top planes (the hood and the roof), visible. Regarding this presentation, ALL virtual lines are perpendicular to the side ‒ like the two axes connecting the wheels ‒ and converge to the one Vanishing Point that lies on the Horizon Line.

I need to place three additional Guidelines. They can be placed freely to restrict my drawing area: The Left Boundary, which is the very outer line of the left side of the car, and the Front and Back Boundaries, which indicate the very front and rear side of the car. 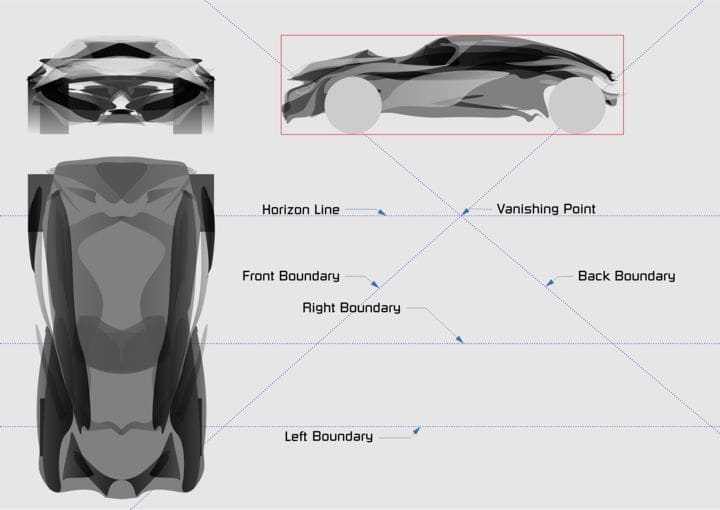 In order to retrieve the Right or far side Boundary, we draw a bounding rectangle around the car in Side View first. Move it down and enable View > Snap To > Snap to Guidelines and fit the lower left point to the intersection of the Front and Left Boundary. Resize the rectangle uniformly, until the bottom right corner is on the intersection of the Back and Left Boundary. The bottom side of the rectangle becomes the Left or near side Boundary.

Now we will use the Extrude Tool (Toolbox > Extrude tool), to create a box with a depth of 40 units, you can set this in the Properties Bar of the Extrude Tool. Make sure you drag from the center of the bounding rectangle copy to the Vanishing Point. 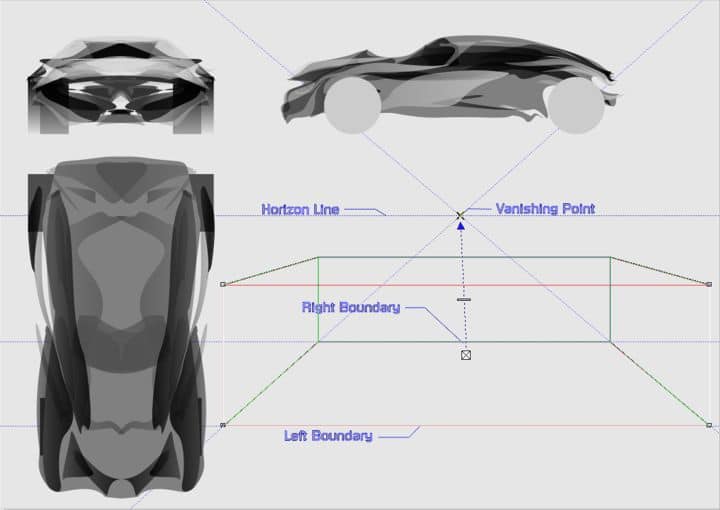 If you have no fills enabled, you will already see the far side bottom edge. Drag a Guideline from the Ruler and align it on the bottom far side edge. After that you can delete the whole box, we will later use more efficient tools for the perspective construction.

In Automotive Design, there are certain terms used throughout every design, which indicate the characteristics which all cars have in common, regardless of type and shape. In our design, we will indicate three major lines, which the Top and Side View have in common, to help us in projecting points into perspective. 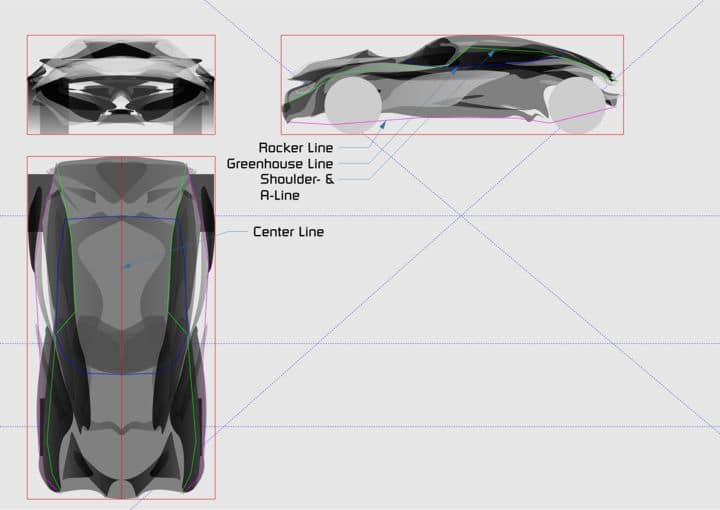 I've drawn these lines in Side View first and then copied and rotated them to match the Top View. With the Shape Tool and pressed Ctrl Key I moved the nodes only on the horizontal axis, to ensure having the nodes matching at the same position in Side and Top View in relation to the length of the car.

Since value changes in 2D indicate form changes in 3D, I only used my orthogonal sketches sporadically. I also added boundary rectangles and a centerline in Top View. We will need the centerline later for symmetric projection purposes.

Once the Character Lines are established, I duplicate the Top View first, including the Character Lines and Boundary Rectangle, and rotate it by 90 degrees (use the rotation settings in the Property bar). In the duplicate I created a boundary of the car for a clear silhouette, with Arrange > Shaping > Boundary.

With the Duplicate selected, I apply a perspective effect with Effects > Add Perspective, and move the four corners to match my Ground Plane.

The same is repeated for the Side View (except the perspective distortion), and I put the Side View Duplicate with the bottom edge on to the ground plane centerline (now correctly located in perspective). 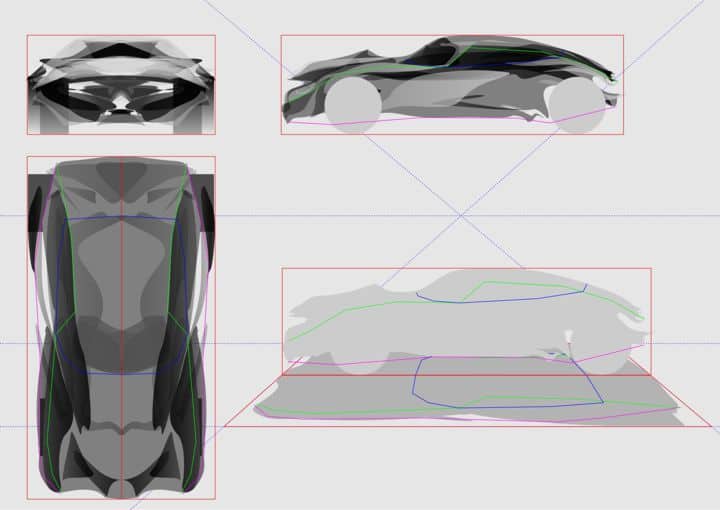 For the wheels for our car I drew circles in dark grey (Toolbox > Ellipse tool or F7), making sure they match the Ground Plane Reference of the car silhouette as well as the position of the wheels in Centerline View (Centerline Section Cut, actually). An extrusion applied with the Extrude Tool (Toolbox > Extrude), changes the circles into wheels. Notice that I also played with the Bevel Settings in the Properties Bar. 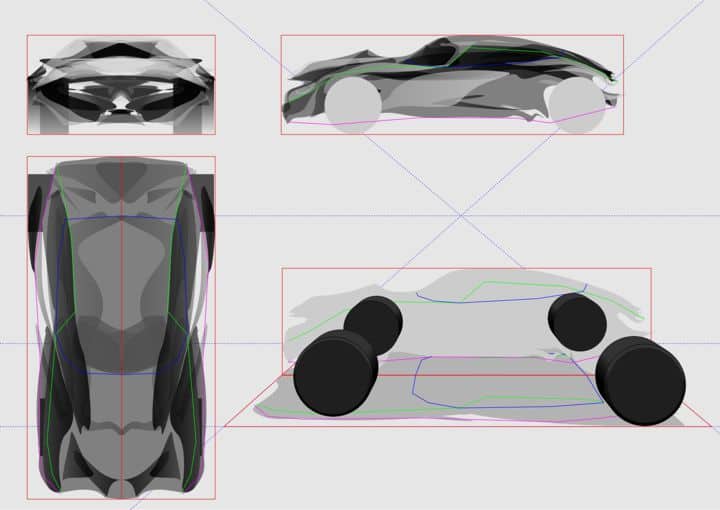 The wheels need some rims too, but I'll not cover the creation of those here since it would be out of focus for this tutorial. 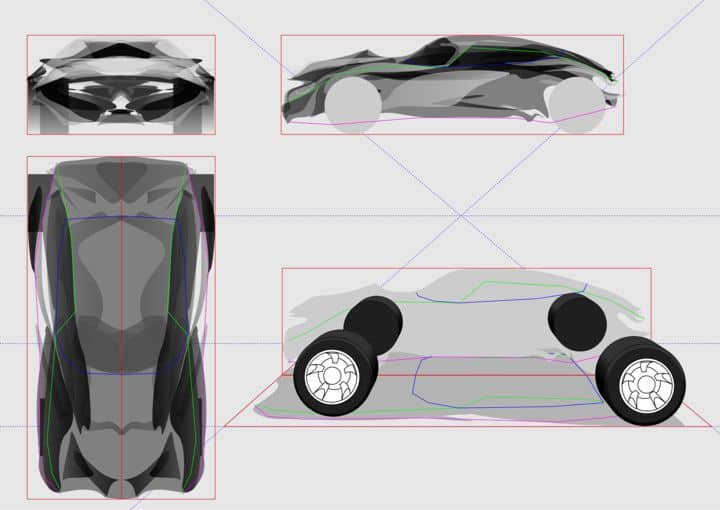 We will continue with the projection of the Character Lines of the car into perspective. I'll start with the magenta Rocker Line.

First, I create two additional Guidelines. One will end up in the Vanishing Point (the Rotation Center ‒ accessible by double-clicking on the Guideline ‒ needs to be moved and snapped on to the Vanishing Point). The second Guideline is used as a vertical axis to project the points up.

For each Node on the Rocker Line Curve, I follow a strict process: 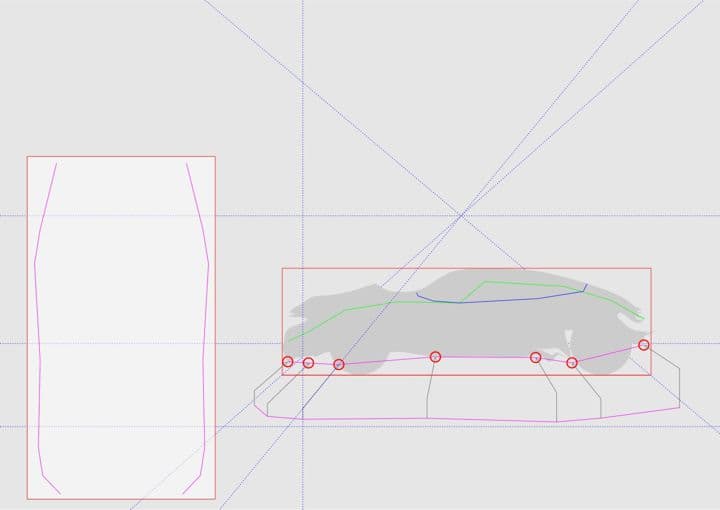 This is repeated for each Node on the Rocker Line, for the near and the far side. By combining the two new curves and closing the front and back we now have the bottom of the car already! 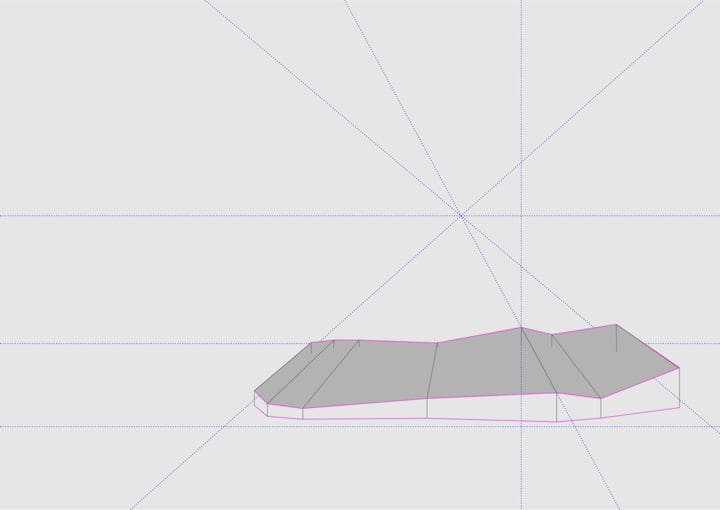 The same Process is also repeated for the Shoulder/A-Line Curve and the Greenhouse Line Curve. 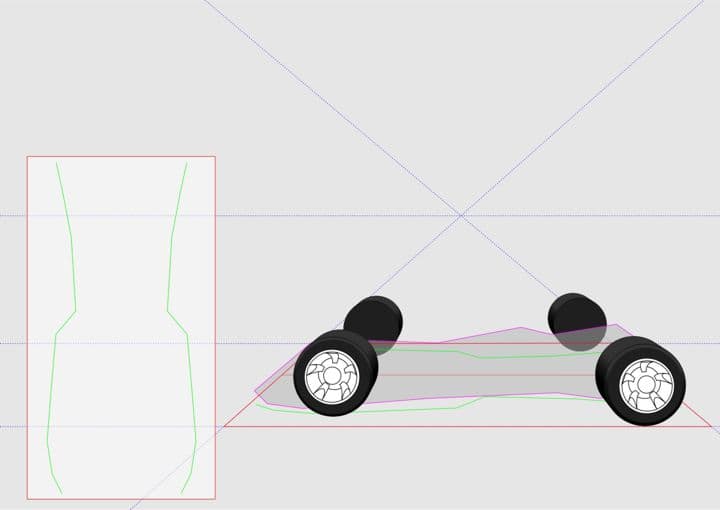 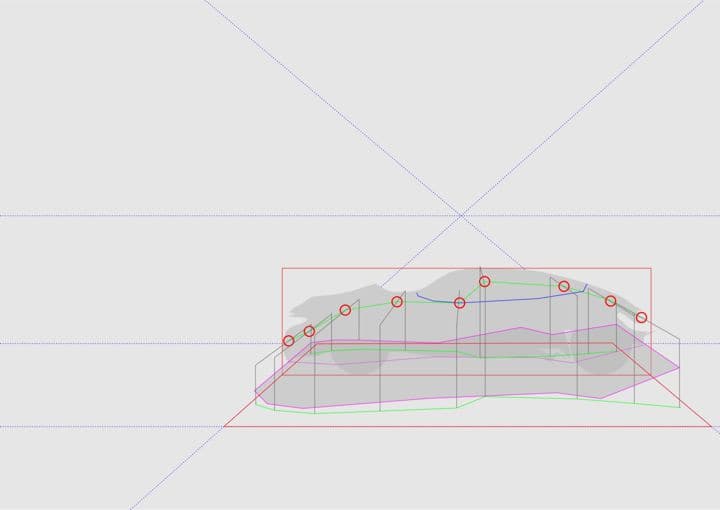 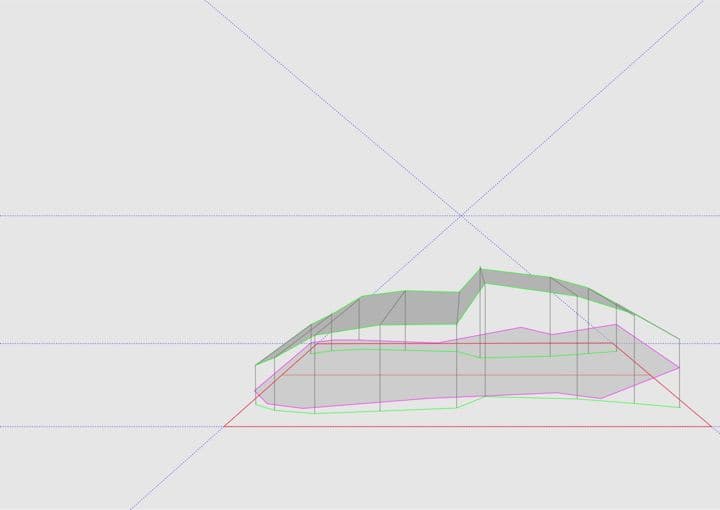 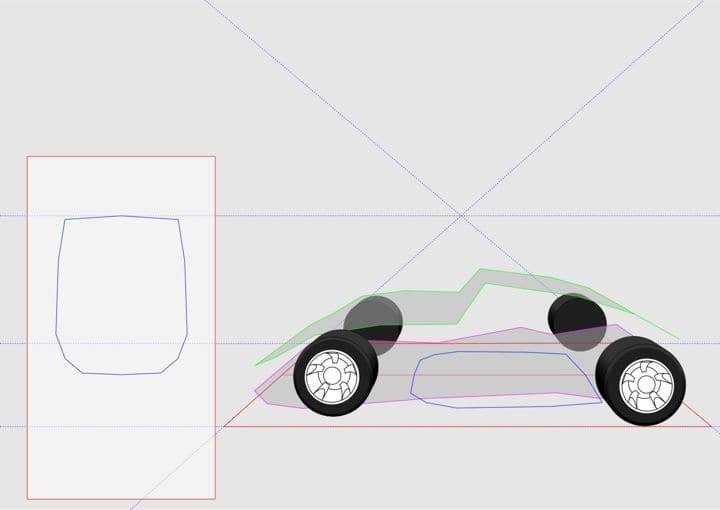 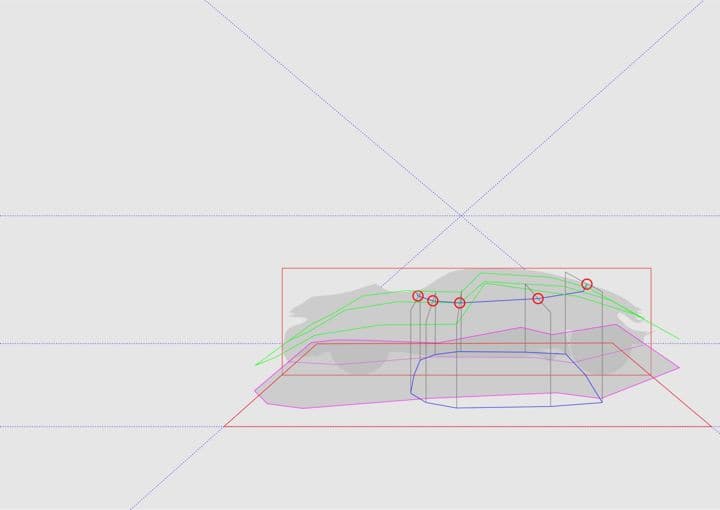 The best practice would be to put all new shapes on separate Layers. This helps to keep the construction drawing clean by hiding layers individually. 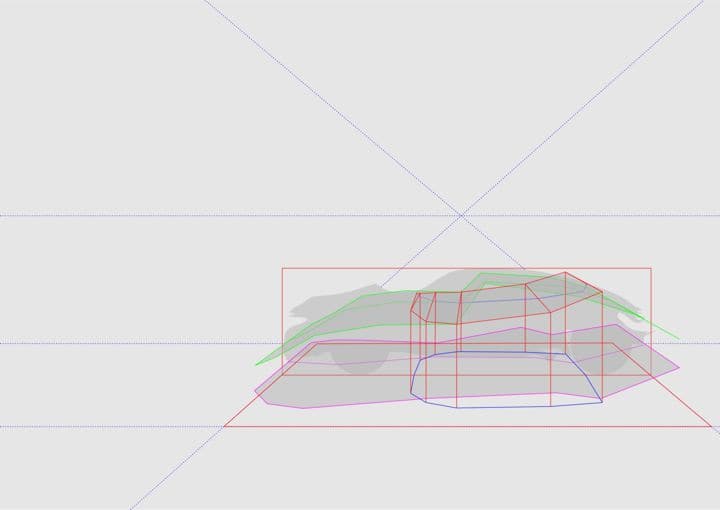 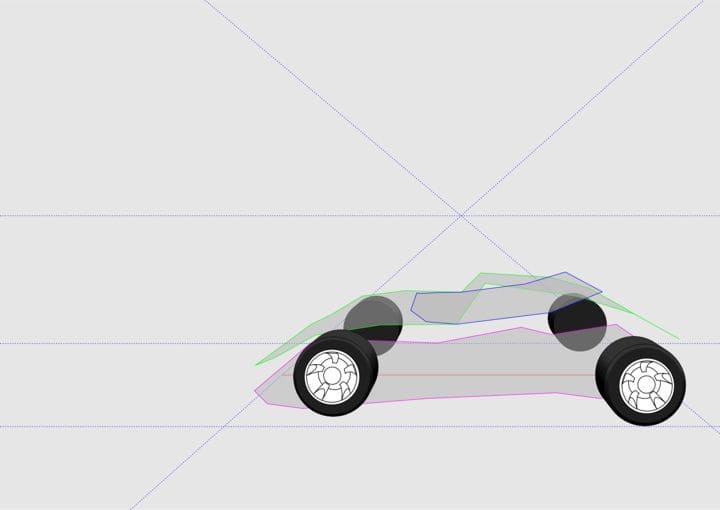 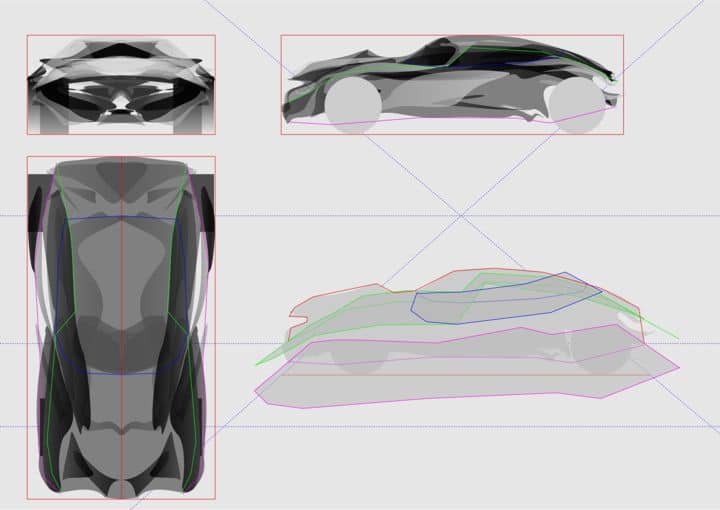 To establish the overall silhouette, it is actually only a matter of connecting the endpoints of the planes, but after that I go further and move some points due to foreshortening of the far side of the perspective drawing. 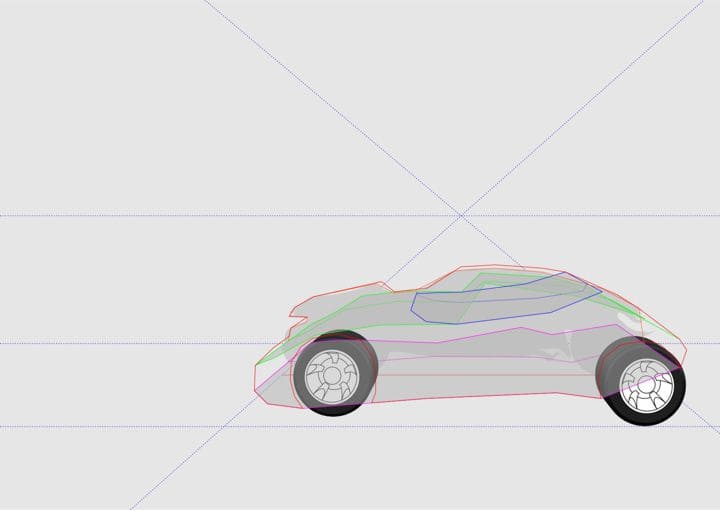 Now I can estimate the location of the major forms like the windows and the wind shield. If you are not sure, you can continue projecting points into perspective of course, as we have done for the wind shield, the hood bump, the fenders and so on. 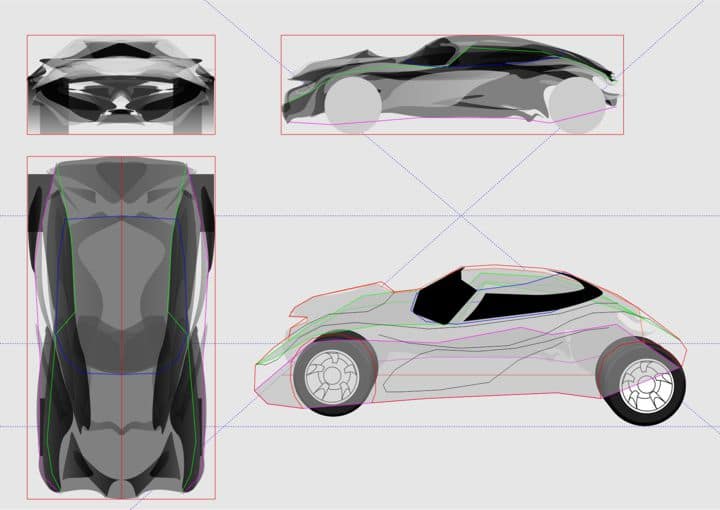 With the use of the Artistic Media Brushes (Toolbox > Artistic Media), and various Line Weights in the Outlines you can achieve very effective results in indicating forms. In the image below you can also see that I used the Ground Plane Reference as the shadow of the car, which provides a strong visual relationship to the ground. Cars usually don't levitate, right? 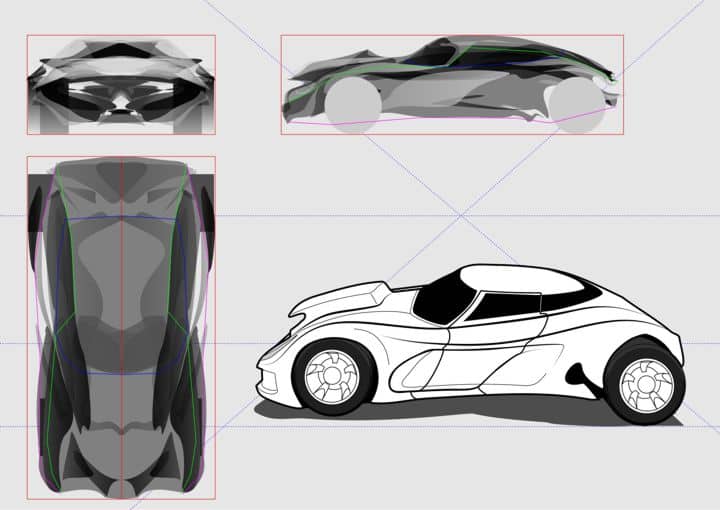 To be honest, the drawing looks a bit odd. That is due to the lack of a second Vanishing Point, which would be located down the vertical axis, since we also look down onto the car in this projection. I also like to add a wide-lens distortion effect.

Create a boundary rectangle of the perspective drawing and convert it to curves (CTRL+Q). Move the bottom corners closer to each other, just a bit, to simulate a sense of vertical convergence. Then convert the Node type of all nodes to Curve Type in the Shape Tool Properties Bar, and drag the upper and lower edge slightly downwards, to achieve an arched look. The entire rectangle should now look like a bent screen in perspective.

Select the car again and go to the Envelope Tool (Toolbox > Envelope tool). In the Properties Bar click on the Eyedropper Icon (Create Envelope From) and click onto the rectangle we created in the previous step.

The car is now distorted nicely. To make the effect visible, you need to move one of the envelope corners slightly. 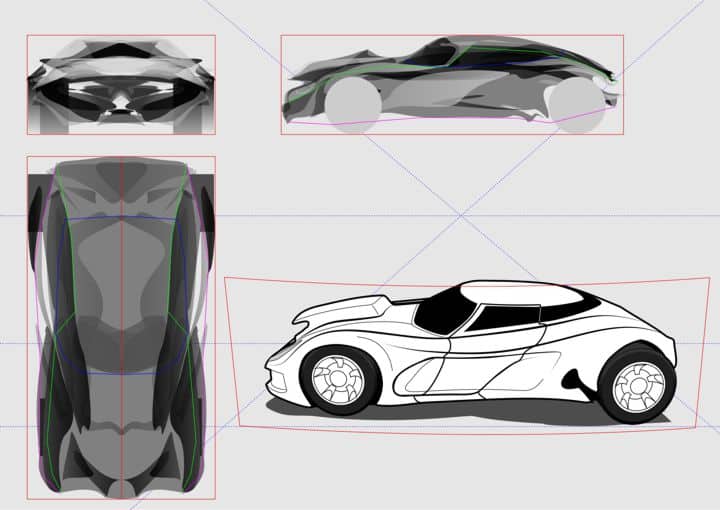 Your car is ready for a ride now!

I have used the tools in this tutorial to provide a very flexible way of drawing in perspective. It is even possible to create drawings with two or more Vanishing Points.