Drawing objects in CorelDRAW is accomplished by using a variety of tools found in the Toolbox. In this Tutorial, we will look at the Curve Tool Flyout. The curve tools include: the Freehand tool, the 2-Point Line tool, the Bezier tool, the Artistic Media tool, the Pen tool, the B-Spline tool, the Polyline tool, and the 3-Point Curve tool. Once properly mastered, the use of these tools will make design creation simple and accurate.

What you will learn

In this tutorial you will learn about:

Before looking at the various curve tools available in CorelDRAW, we must look at the types of nodes that can be created, and how they are controlled. The figure below shows what a node would look like if selected with the Shape tool. The Shape tool is the standard tool for moving an manipulating nodes. This node pictured is what a cusp node would look like. 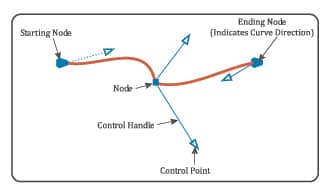 Cusp nodes let you create sharp transitions, such as corners or sharp angles, in a curve object. You can move the control handles in a cusp node independently of one another, changing only the line on one side of the node.

With smooth nodes, the lines passing through the node take on the shape of a curve, producing smooth transitions between line segments. The control handles of a smooth node are always directly opposite one another, but they may be at different distances from the node.

Symmetrical nodes are similar to smooth nodes. They create a smooth transition between line segments, but they also let you give lines on both sides of a node the same curve appearance. The control handles of symmetrical nodes are directly opposite each other and at an equal distance from the node.

Now that we understand the various types of nodes in CorelDRAW, we can look at the tools used to create objects and then look at how to modify these objects by adding nodes and using the various types of nodes to make the necessary adjustments. For the purpose of this tutorial, we will only be looking at the freehand tool. While there are a number of other tools available, we will save them for future tutorials that will allow us to better focus on them.

Now we can move on to the various curve tools available in CorelDRAW. The Curve Tool Fly-out that lets you create both curved and straight line segments.

The Freehand tool lets you control the smoothness of the curved line you are drawing as well as add segments to an existing line. However, the Polyline tool is easier to use for quickly drawing a complex line that consists of alternating curved and straight segments and allows you to draw in preview mode..

You can draw straight lines by using the 2-point line tool. This tool also allows you to create straight lines that are perpendicular or tangent to objects.

The Bezier and Pen tools let you draw lines one segment at a time by placing each node with precision and controlling the shape of each curved segment. The Pen tool gives you the added ability to preview the line segments as you are drawing. 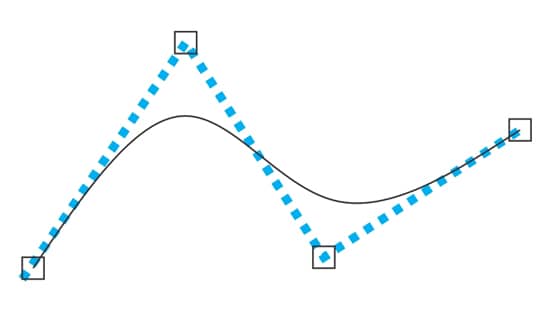 The B-spline tool lets you draw curved lines by setting control points that shape the curve without breaking it into segments.

The 3-point curve tool lets you draw simple curved lines by specifying their width and height. You can use this tool to create arc shapes quickly without manipulating nodes.

For this design we will use the Freehand Tool, which is the first one within the Curve Flyout.

We are going to use a this tool to show how easy it is to recreate a logo from a low resolution (72dpi) bitmap.

Once the object has been created, select the 4 nodes on the left side vertical lines with the shape tool. Next, on the Interactive property bar, select the Convert to Curve icon.

This will then allow you to use the shape tool to drag the control handles out to match the curvature of the image below.

Once you are satisfied with the shaping of the path around this character, give it a solid contrasting Colors, this way it is easier to see your progress. You can then move on to the next character.

When creating a character or object that is made up of multiple paths or areas that need to be "knocked out" such as in the letters A,a, B,b, D,d, O,o P,p Q,q or R remember that the objects need to be combined once they have been created. This can be done from the Arrange menu and select Combine, once both objects have been selected.

Using this process you will find it easy to re-create almost any image you wish. Some may take a bit more time than others, but in the end, you will have a piece of artwork that will remind you just how easy it is to recreate in the CorelDRAW Graphics Suite.